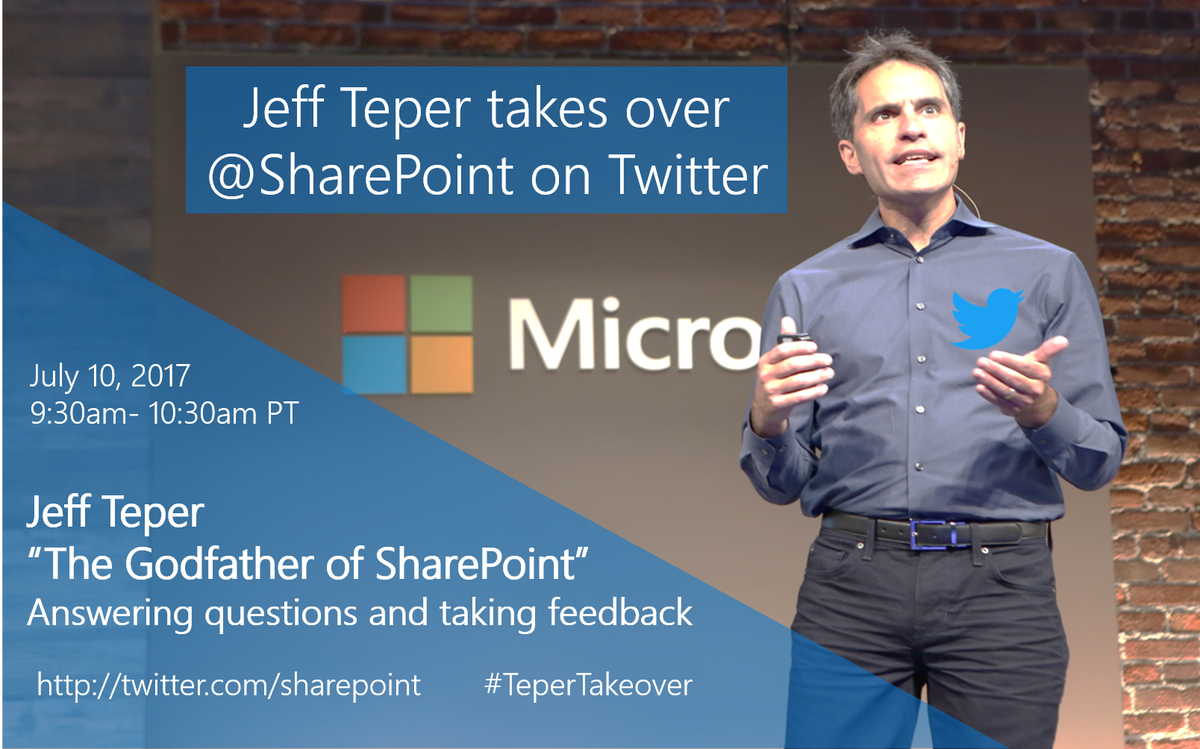 Microsoft Corporate Vice President Jeff Teper took to Twitter on July 10th to answer questions (and share a bit of news). Summarized below are a few of the interesting questions with my thoughts below the tweet (in order as they happened).

Once again, InfoPath will be replaced. But not yet. The support statement on InfoPath is at https://blogs.office.com/en-us/2014/01/31/update-on-infopath-and-sharepoint-forms/. I cannot believe this is still a question people have to ask.

Working on it! More to share at @MS_Ignite this September. Stay tuned! #TeperTakeover

Sigh, again with the "branding." It is quite evident that there is no solution that will please [all of the people, all of the time](http://quoteinvestigator.com/2013/12/11/cannot-fool/). More significant -- the first of several mentions of Ignite. I suspect there will again be substantial announcements at [Ignite](https://www.microsoft.com/en-us/ignite/default.aspx) for SharePoint. I will be there. Look me up if you want to connect.

Reading between the lines here, I expect that Publishing Sites will see no further investment. But the most popular Publishing features will get ported to Communication Sites. (Specifically mentioned was variations.) Sadly, we have no time-frame for those ports, so organizations will need to evaluate Comm sites to see if they meet the requirements. I fear that they won't for many, so Publishing sites will get used, pushing the Comm sites roll out far into the future for those orgs. One of the downsides to shipping minimally-viable products.

Yes doc sets will continue - while we've updated a lot of the UX, we know we have more to and this one a candidate for '18

I have a number of clients using document sets and it is a roadblock for Modern. This is a confirmation that they will be improved.

This is a bit of a disappointment, since the answer is really just a work-around. But, as soon as the [SPFx Extensions](https://dev.office.com/sharepoint/docs/spfx/extensions/overview-extensions) get released, we can build this ourselves.

So, cloud first. Cloud is where Microsoft sees the market going, so they are going there as well. That makes sense and provides the funding for improvements to SharePoint. Jeff seems to be hinting that an on-premise version update is a year away. (Product versions are tied to fiscal years and Microsoft is currently in fiscal 2018.)

We are going to make it easier to adapt modern sites but if you are running classic sites, we have no plans to turn them off. #TeperTakeover

When the Modern UI first started to rollout, the messaging was a bit muddied. This should clear it up -- the classic stuff will be there as long as you need it.

All sites in SharePoint are future proof but we currently have no plans around Contact Lists. #TeperTakeover

So, while Document Sets will get some attention, Contact Lists will not. I suspect that there are other list templates that will get left behind. If there is ont that is important to you, I suggest getting it on [UserVoice](https://sharepoint.uservoice.com/)!

We are working on filtering/sorting in large lists and library filtering. More to share at @MS_Ignite! #TeperTakeover

I'm sure that [Marc](https://twitter.com/sympmarc) wants to hear about [removing the limits](http://sympmarc.com/tag/5000-item-limit/), but for now we have to live with improvements in showing a subset of the large list.

Another source of confusion -- how to get the new Communication Sites. Of course, I recommend a separate tenant for first release as a #BestPractice.

@SharePoint Will it be possible to transform the SharePoint Online Root Site and old team sites into Communication Sites? #tepertakeover

A great question that was not answered. However...

So, it is possible to "modernize" a site. If you don't want to wait for an automated switch, you could start creating modern pages and set it as the home page. But, I'm not 100% sure the rollup stuff all works as expected.

Too big a change for Feature Pack. Working on plans for next server which will get part of new UX. Will share when plan baked.

No hope for Modern UI on-premises anytime soon. But there is a new on-premises version coming as we learned earlier.

As is usual for a general-audience event, just a single mention of development at the end.